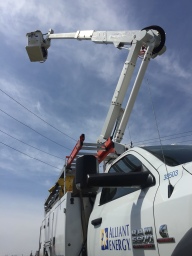 The technology in our newest trucks brings benefits everyone can see and hear.  Automatically, the trucks engine will shut off, letting a battery power the boom and bucket. This means the engine isn’t burning fuel or creating emissions, and it is much quieter.

“The battery-powered boom makes it easier to hear and communicate with your coworkers as you work.” said Brad Hoeper, a Monroe line mechanic. “It’s safer for us, plus it’s quieter when we’re working in neighborhoods. It’s less of a disturbance, especially at night.”

Battery technology has evolved significantly in recent years. Those advancements mean the crews can use the battery powered boom an entire day before needing to recharge. The truck is duel fuel so in an emergency, if the battery is not charged, the truck’s engine can still power the system.

he summer, without having to run the engine,” said Greg Genin, senior manager of fleet services. “By using the hybrid system to run both the boom and maintain cab temperature, it significantly reduces the truck idle time, which has a favorable impact on the environment.”

Over the next several years, we will be adding more of these special hybrid bucket trucks in Wisconsin. It’s one of the many ways we can make a positive impact on the environment.

This entry was posted in Uncategorized. Bookmark the permalink.